The National Ride was the single hardest thing I’ve done in my life. And as a first year missionary, I will say I had no clue what I was getting myself into. I just knew I had to do it.

My name is Jessica Freund, and this is my reflection of my first ride with Biking for Babies.

I first heard about Biking for Babies at the SEEK 2019 conference in January. The booth with bikes looked a little out of place among all the Catholic apparel, books, and booths for religious life. I loved biking, but I didn’t know what I was getting myself into. In talking with the missionaries and staff there, I didn’t think much about it, but I gave them my contact information and later decided to apply.

I had never done any mission work before and loved the idea of being able to ride my bike as a missionary. My interview with Biking for Babies started and ended in a prayer, and for me, this was my first interview that ever included prayer. Because of this, I felt the Holy Spirit moving in me. So a couple weeks later when I received my acceptance letter from Biking for Babies, it was easy to say yes.

Training was tough, but nothing can really prepare you to understand what the National Ride is like. As I said, it was the hardest think I’ve ever done. But what did it feel like to ride 600 miles?

Initially, there is so much excitement; you’ve been thinking about this day for the past six months, and here it is. And the first day of riding isn’t too tough. It’s the consecutive days that you wake up feeling the aches and pains from the previous day, the tight muscles, the sore limbs, and let me not forget the endless hunger you feel. Honestly, the hardest part about the ride for me was waking up with all of the stiffness and sore muscles and choosing to get back on the bike regardless of how much my rear end hurt.

I did it for the mothers and the unborn babies. As missionaries, we are called to stand up for the unborn. The ride didn’t really make sense to me until one of my teammates made the comparison of us riders to pregnant mothers in crisis pregnancies. He explained that as a rider we have a long journey ahead of us; it’s not easy, but that’s why we have the support team, just as mothers have Pregnancy Resource Centers. We feel a lot of aches and pains on the ride, and we know we can make it stop and get off our bike at any time if we so choose. But we don’t. We stay on our bikes, and we ride to St. Louis to ask mothers to keep the baby rather than “getting off the bike” by choosing abortion.

I realize that me riding a bike will never actually compare to a pregnancy. But it gives me a small glimpse into what these mothers are feeling through a crisis pregnancy. If it weren’t for the strength that God has given me, I know I never would have been able to complete such a ride on my own. Because I know this feat was only possible with God by side, I pray that mothers will ask Him for the same strength and courage to carry their babies to term and to get back on their bikes daily. 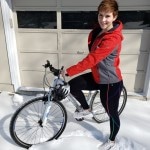 Jessica Freund is a first-year missionary who rode on the Eastern Route of the 2019 National Ride. She’s a student at Kansas State University, studying Hospitality with an emphasis in Food and Beverage. Support her on her personal fundraising page: https://bikingforbabies.com/jessica-freund/.